We welcome you to view our previous scientific poster presentations that have been presented at various conferences over the last year. To enlarge any poster, please click on it. You can click on it one more time for an even closer view and scroll using your mouse to view different parts of the poster. The full text from each poster is posted immediately beneath the poster. 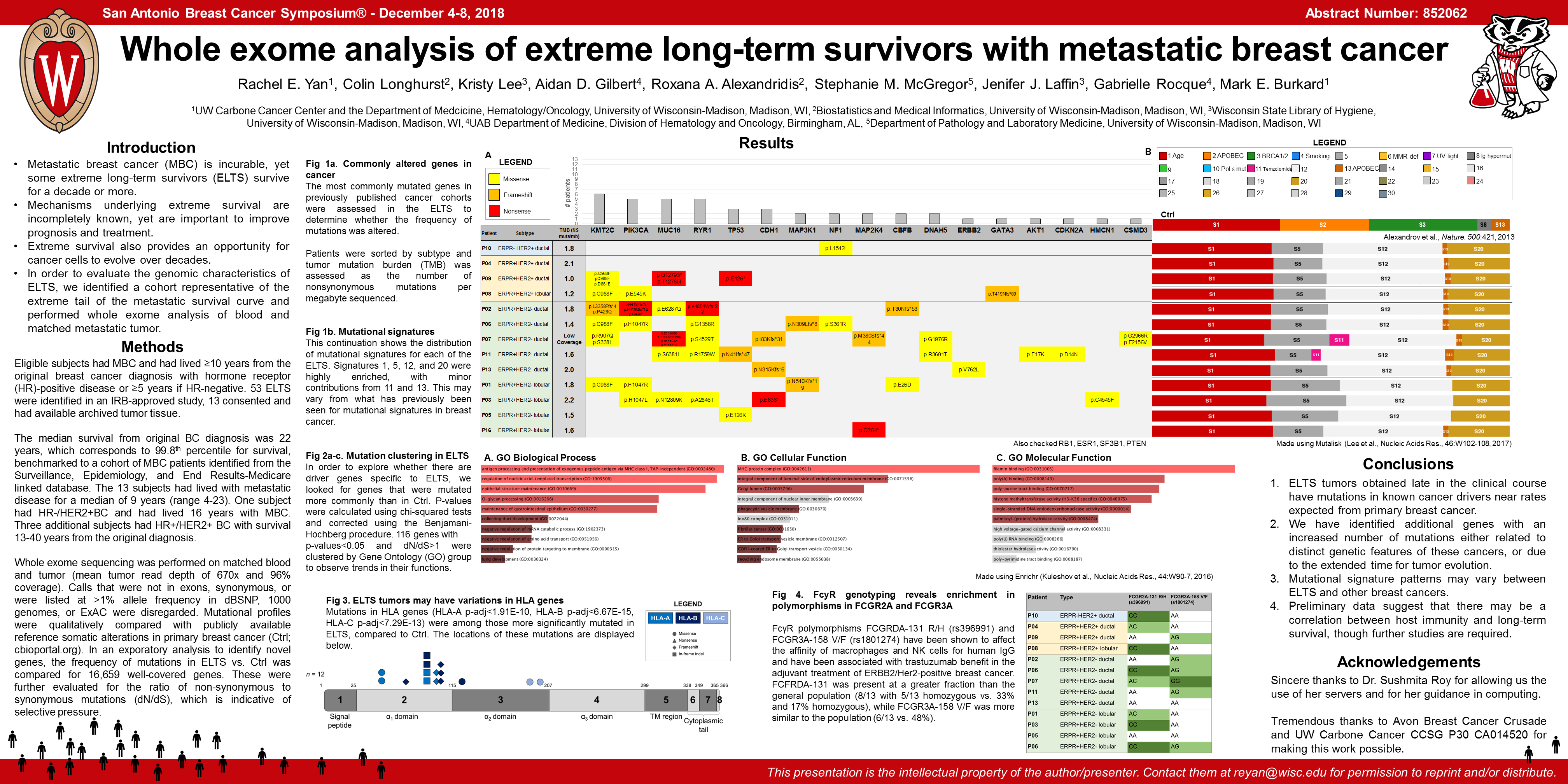 The above poster was presented at the San Antonio Breast Cancer Symposium in 2018. Click to zoom and scroll with your mouse to view different parts of the poster.

The presentation “Whole exome analysis of extreme long-term survivors with metastatic breast cancer” is the intellectual property of the author. Contact them at reyan@wisc.edu for permission to reprint and/or distribute.

Metastatic breast cancer (MBC) is incurable, yet some extreme long-term survivors (ELTS) survive for a decade or more.

Mechanisms underlying extreme survival are incompletely known, yet are important to improve prognosis and treatment.

Extreme survival also provides an opportunity for cancer cells to evolve over decades.

In order to evaluate the genomic characteristics of ELTS, we identified a cohort representative of the extreme tail of the metastatic survival curve and performed whole exome analysis of blood and matched metastatic tumor.

Eligible subjects had MBC and had lived ≥ 10 years from the original breast cancer diagnosis with hormone receptor (HR)-positive disease or ≥ 5 years if HR-negative. 53 ELTS were identified in an IRB-approved study, 13 consented and had available archived tumor tissue.

The median survivor from orginal BC diagnosis was 22 years, which corresponds to 99.8th percentile for survival, benchmarked to a cohort of MBC patients identified from the Surveillance, Epidemiology, and End Results-Medicare linked database. The 13 subjects had lived with metastatic disease for a median of 9 years (range 4 – 23). One subject had HR-/HER2+BC and had lived 16 years with MBC. Three additional subjects had HR+/HER2+ BC with survival 13-40 years from the original diagnosis.

Whole exome sequencing was performed on matched blood and tumor (mean tumor read depth of 670x and 96% coverage). Calls that were not in exons, synonymous, or were listed at > 1% allele frequency in dBSNP, 1000 genomes, or ExAC were disregarded. Mutational profiles were qualitatively compared with publicly available reference somatic alterations in primary breast cancer (Ctrl; cbioportal.org). In an exploratory analysis to identify novel genes, the frequency of mutations in ELTS vs. Ctrl was compared for 16,659 well-covered genes. These were further evaluated for the ratio of non-synonymous to synonymous mutations (dN/dS), which is indicative of selective pressure.

We have identified additional genes with an increased number of mutations either related to distinct genetic features of these cancers, or due to the extended time for tumor evolution.

Mutational signature patterns may vary between ELTS and other breast cancers.

Preliminary data suggest that there may be a correlation between host immunity and long-term survival, though further studies are required.

Sincere thanks to Dr. Sushmita Roy for allowing us the use of her servers and for her guidance in computing. 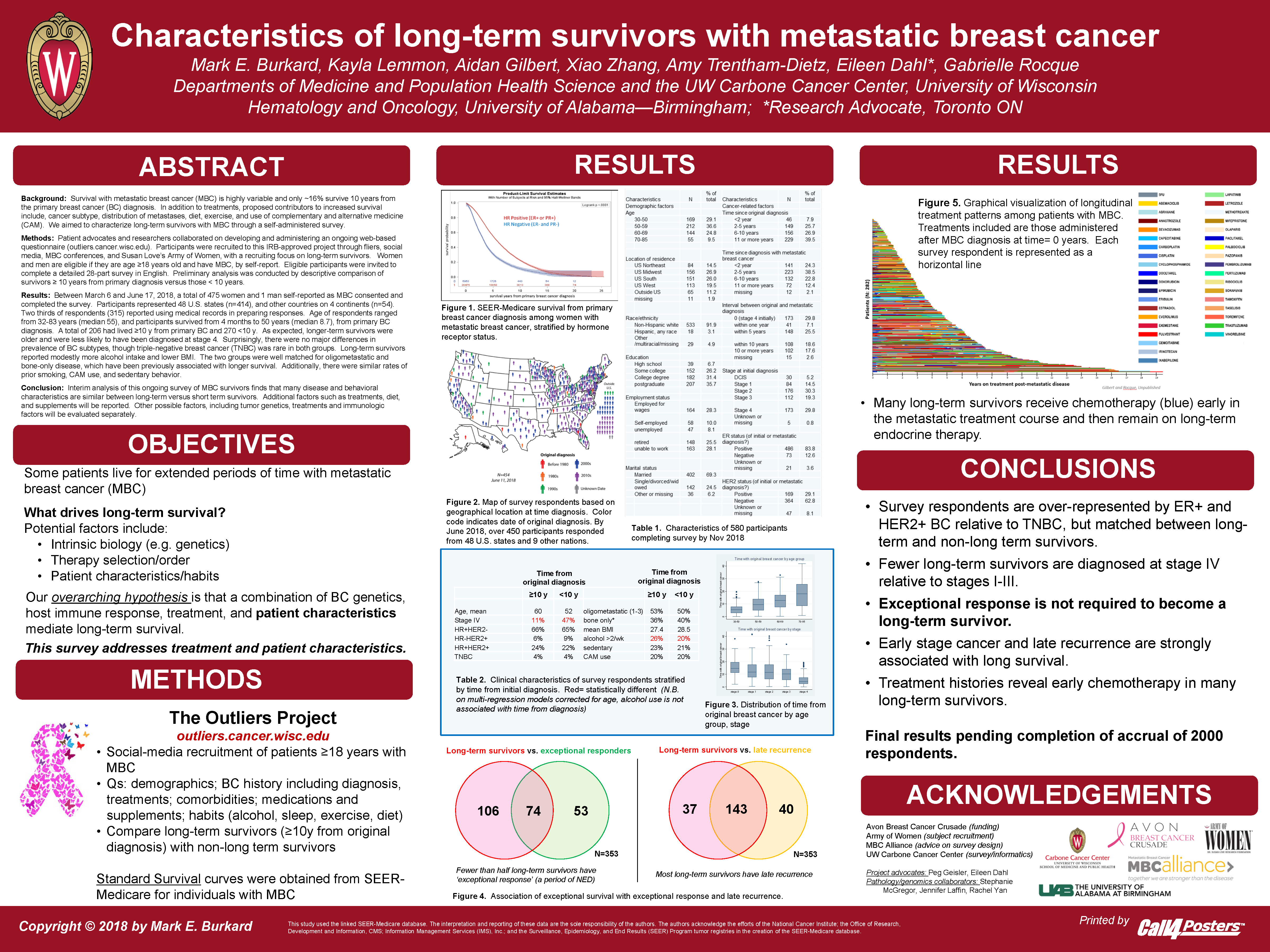 Click to zoom and scroll with your mouse to view different parts of the poster. The presentation “Characteristics of long-term survivors with metastatic breast cancer” is the intellectual property of Mark E. Burkard.

Survival with metastatic breast cancer (MBC) is highly variable and only ~16% survive 10 years from the primary breast cancer (BC) diagnosis. In addition to treatments, proposed contributors to increased survival include cancer subtype, distribution of metastases, diet, exercise, and use of complementary and alternative medicine (CAM). We aimed to characterize long-term survivors with MBC through a self-administered survey.

Patient advocates and researchers collaborated on developing and administering an ongoing web-based questionnaire (outliers.cancer.wisc.edu). Participants were recruited to this IRB-Approved project through filers, social media, MBC conferences, and Susan Love’s Army of Women, with a recruiting focus on long-term survivors. Women and men are eligible if they are ≥ 18 years old and have MBC, by self-report. Eligible participants were invited to complete a detailed 28-part survey in English. Preliminary analysis was conducted by descriptive comparison of survivors ≥ 10 years from primary diagnosis versus those < 10 years.

Between March 6 and June 17, 2018, a total of 475 women and 1 man self-reported as MBC consented and completed the survey. Patients represented 48 U.S. states (n=414), and other countries on 4 continents (n=54). Two thirds of respondents (315) reported using medical records in preparing responses. Age of respondents ranged from 32-83 years (median 55), and participants survived from 4 months to 50 years (median 8.7), from primary BC diagnosis. A total of 206 had lived ≥ 10 years from primary BC and 270 < 10 years. As expected, longer-term survivors were older and were less likely to have been diagnosed at stage 4. Surprisingly, there were no major differences in prevalence of BC subtypes, though triple-negative breast cancer (TNBC) was rare in both groups. Long-term survivors reported modestly more alcohol intake and lower BMI. The two groups were well matched for oligometastatic and bone-only disease, which have been previously associated with longer survival. Additionally, there were similar rates of prior smoking, CAM use, and sedentary behavior.

Interim analysis of this ongoing survey of MBC survivors finds that many disease and behavioral characteristics are similar between long-term versus short-term survivors. Additional factors such as treatments, diet, and supplements will be reported. Other possible factors, including tumor genetics, treatments and immunologic factors will be evaluated separately.

Some patients live for extended periods of time with metastatic breast cancer (MBC).

Our overarching hypothesis is that a combination of BC genetics, host immune response, treatment, and patient characteristics mediate long-term survival.

Standard Survival curves were obtained from SEER-Medicare for individuals with MBC.

See all project sponsors on our Partners & Support page.

This study used the linked SEER-Medicare database. The interpretation and reporting of these data are the sole responsibility of the authors. The authors acknowledge the efforts of the National Cancer Institute (NCI); the Office of Research, Development and Information, CMS; Information Management Services (IMS), Inc.; and the Surveillance, Epidemiology, and End Results (SEER) Program tumor registries in the creation of the SEER-Medicare database.